Hulu's Upfront Message: Think Of Us As TV, But 'TV Redefined' 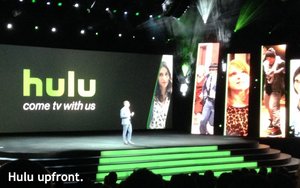 With a growing list of original shows, Hulu positioned itself more like a TV network than an SVOD service at its upfront presentation in New York Wednesday morning.

“Come TV with us” was the tagline of the Hulu presentation, which Hulu referred to as an “upfront,” although it was held during the week of so-called “NewFronts” being put on by digital content companies ranging from BuzzFeed to Time Inc.

Hulu’s upfront emphasized the service’s wide array of programming choices capable of reaching across all demographics.

“We have a captive audience waiting to discover our content and your ads,” Hulu CEO Mike Hopkins told the ad reps gathered at the Madison Square Garden Theater.

“If 2015 was the year Hulu broke out, 2016 is the year we go bigger and bolder,” he said. “We’re doubling down on the strategy that brought us this far. We’re expanding our content offerings to include many new acquisitions, exciting collaborations with top creative talent, and a richer, more diverse content library including kids programming and documentary.”

Among the acquisitions Hulu promoted: Its acquisition of the "Curious George" animated series -- which Craig Erwich, Hulu’s senior vice president of content, called "the 'Seinfeld' of children’s programming." (Hulu’s acquisition of "Seinfeld" was the big announcement at its upfront a year ago.)

“Seventy percent of our audience now watches Hulu on the big screen in the family room,” Hopkins said, driving home the point that the Hulu viewing experience is just like television. “We’ve literally put TV back in the TV. … Hulu has become a destination for the entire family.”

On the programming front, Hulu announced renewals for some of its best-known originals and announced two new original dramas in development. The renewals include the comedies “The Mindy Project” (for a fifth season) and “Difficult People” (for a second season).

In addition, Hulu announced a second-season renewal for its first original drama, “The Path” (starring Aaron Paul from “Breaking Bad”). Hulu’s new dramas in development are “Shut Eye,” a drama series about storefront psychics and the gypsy clans that control them, and “Chance,” an adaptation of a novel of the same title by West Coast author Kem Nunn about a San Francisco psychiatrist named Eldon Chance. Hugh Laurie stars in the title role.

Hulu executives affirmed that the streaming service is committed to advertising and commercials.

“We deeply value our partnerships with advertisers,” Hopkins said. Later in the presentation, Hulu’s senior vice president of advertising, Peter Naylor, gave three examples of how advertisers’ brands have been integrated into two Hulu originals -- Goose Island Beer Co., in the Hulu comedy “Casual,” and Microsoft and Lexus in “The Mindy Project.”

“TV is new media,” Naylor said, giving his contribution to the “Hulu is TV” theme of the company’s upfront. “Interactive ads have been around for years online,” he said as the words “Hulu is TV redefined” were shown on a screen behind him. “But interactivity in the living room? That’s also new for TV. So the rise of connected TV and all the benefits that come with it, TV really is the new media of today.”

Naylor then announced a new partnership between Hulu and BrightLine, a company that facilitates interactive advertising on connected TVs.

connected tv, newfronts, streaming, tv, upfront
1 comment about " Hulu's Upfront Message: Think Of Us As TV, But 'TV Redefined'".
Check to receive email when comments are posted.
Next story loading