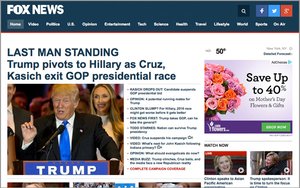 Quarterly advertising revenue inched up for 21st Century Fox -- more or less in line with other big media company results.

For its fiscal third-quarter period, ad revenues rose 3.6% to $1.9 billion for all of Fox -- with U.S. cable TV networks witnessing a 17% hike in advertising revenues.

It did not disclose specific advertising results for its Fox network.

This came from lower worldwide home entertainment,TV production revenues and negative impact from foreign exchange rates -- all this despite strong worldwide theatrical revenues for “Deadpool,” grossing more than $760 million.

Fox’s stock price closed slightly down, 0.5% to $29.80 on Wednesday. Then it rose sharply after its earnings release in aftermarket activity -- only to fall again.