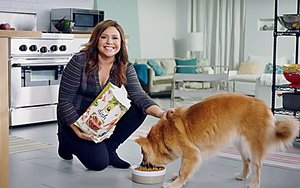 The company is taking a bite out of the massive pet food industry, passing $280 million in retail sales for the most recent 52 week period according to Nielsen ScanTrack. The company is expecting to launch 15 new items in 2016 across both cat and dog segments.

The new $40 million campaign spans TV, print and digital. This follows a 2015 advertising campaign that was the brand’s biggest to date at the time, which resulted in an awareness boost of over 10% and lead to $100 million in sales growth.

The products featured in the campaign are Zero Grain, a grain-free kibble, and Dish, a high-quality kibble with flavor enhancements such as real peas and carrots.

In addition to the two product-focused TV spots, created by Atlanta-based agency Moxie, Nutrish is launching activations in a range of national publications, from a pet-driven takeover in Rachael Ray Everyday, to an an interactive cover takeover for May issue of Woman’s Day and sponsorship of the first-ever Pets section on US Weekly magazine online.

The brand’s primary target/audience is women ages 35-54 with a household of $75,000 and higher. The demo includes the busy working mom with never enough time, most are married, college educated, active lifestyle and loves media and technology for entertainment and organization, says Brooke Young, VP, Client Partner, at Moxie. The target also is a label reader, and therefore buys natural.

“This was really an evolution of a campaign we did last year and given that success we really wanted to build on that creative and tell that story in a different way with the two new products,” Young tells Marketing Daily.

The brand is also expanding its media buys to networks.

“Last year we only did cable and syndicated television but this year we went to larger networks in order to expand that reach,” Young says “We pursued TV as it’s the quickest and most effective way to drive mass brand awareness; the TV complements our print and other brand activations that we’re still doing.”