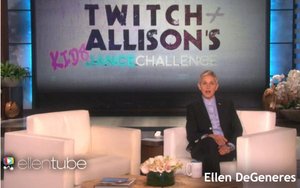 Ellen DeGeneres is expanding her media empire to include a new digital network complete with original programming.

The new Ellen Digital Network was announced Wednesday at an early-evening NewFront presentation and party in New York. The new network is designed to take advantage of DeGeneres’ substantial popularity on platforms outside of her daily syndicated talk show, including her own content sites and social media accounts where she maintains a large following.

With the Ellen Digital Network. DeGeneres and her digital team -- grouped under the name Ellen Digital Ventures -- plan to package and “curate” all of the content her digital company already distributes on her platforms -- plus new, original content -- into one cohesive opportunity for advertisers.

“The Ellen Digital Network will curate all aspects of the Ellen brand combined with original programming and user-generated content,” the company said in a press release Wednesday afternoon.

Among other statistics the company provided to illustrate her popularity in the digital realm: Her YouTube channel, “The Ellen Show,” averages more than 300 million views per month. And her daytime show’s Twitter account, @TheEllenShow, has more than 59 million followers, ranking No. 1 among TV personalities, and No. 7 on all of Twitter, the company claims.

The aim of the Ellen Digital Network initiative is “to create a robust, premium cross-platform advertising and integration opportunity for brands to associate with the compelling and engaging original content Ellen produces and distributes, in a positive, high-quality environment,” the company’s announcement said.

Supervising the Ellen Digital Network is Jill Braff, general manager of Ellen Digital Ventures. She presented the new digital network’s programming slate at Wednesday’s presentation, speaking on behalf of DeGeneres, who was absent.

The original programming announced at the presentation traffics in subject matter that will already be familiar to viewers of her daytime talk show and others who are already familiar with her Web sites -- namely, viral videos of cute babies and pets, and people attempting backyard stunts.

The stunt, baby and cat videos will be most prominent in two new shows -- “#MadeByYou,” a weekly show for EllenTube that will be made up of videos sent in by “Ellen” viewers and online fans; and “Epic or Fail,” a series for EllenTube based on a recurring feature on her daytime show in which viewers can guess if the outcome of a stunt seen in a user-generated video will end well (“Epic”) or badly (“Fail”).

Other new shows announced Wednesday include:

“She’s Brielle-iant,” an original series for EllenTube starring a four-year-old girl, Brielle Milla, who has memorized the names of countries, parts of the human body and the periodic table of the elements. She has appeared frequently on “Ellen.”