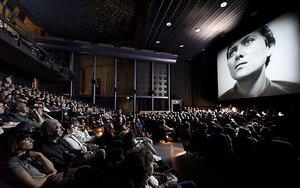 HOLLYWOOD: On the first full day of Turner Classic Movies’ seventh annual Classic Film Festival, I was already living the event’s theme, “Moving Pictures,” as in films that touch you emotionally. I had just seen “The Passion of Joan of Arc,” where the saint burns to a crisp in excruciating close-up.

“I need a drink to recover from my last movie,” I told the college-aged festival crew member checking me into my next choice. She commiserated, because she had previously seen the film, a 1928 silent classic.

That moment of well-informed sympathy was an excellent example of the fan camaraderie the network aims to foster with the festival, which ran April 28-May 1.

“We see ourselves as a great learning lab on growing fan engagement,” said Jennifer Dorian, the company’s general manager.

The network continued that process by launching TCM Backlot, its first official fan club, at the festival. For an annual fee of $87, subscribers will receive perks like exclusive content — including behind-the-scenes and archival videos — and the chance to influence programming through online votes.

One woman was excited about voting for more current movies, so stars would be available for in-person events and on-air commentary. Another attendee didn’t see fan input as a positive, preferring that films continue to be curated exclusively by the experts in TCM’s own programming department.

That expertise will play a big part in TCM’s other new product, FilmStruck, a separate subscription streaming video-on-demand service set to preview in the fall. The SVOD’s programming philosophy will be similar to TCM’s: “very thematic,” said Charles Tabesh, the network’s senior vice president of programming.  “We’ll provide a reason and a context to be there.”

Only the content will vary: About 5% of current TCM programming is foreign language or art/independent films. That number will increase to 80% or over for FilmStruck, according to Tabesh.

He spoke at the festival’s opening “Meet TCM” session, where attendees got the chance to query network execs. One of the first questions: “How is Mr. Osborne?”

This was the second festival in a row that 84-year-old Robert Osborne, the channel’s main on-air host, didn’t attend. He’d planned to be there, but dropped out several weeks ago, citing a “health issue” in a letter he sent to fans. (He was part of the TCM Classic Cruise, another major fan event, in November.)

Osborne has also had much less of an on-air presence these past few months. His regular Saturday night series, "The Essentials," has not returned for its 2016 incarnation.

In a 2014 interview with The New York Times, Osborne said he planned to work “as long as I have health, and as long as I think I look OK on camera.”

Still, in light of Osborne’s absence, I couldn’t help wonder if noted film historian and critic Leonard Maltin, who hosted many presentations at the festival — and such recurring on-air series as “Treasures From The Disney Vault” — was perhaps auditioning for a bigger TCM role in the future.

Maltin conducted himself ably during two interviews probably meant originally for Osborne. One was with Rita Moreno, whose sassy dish before a screening of “The King and I” included mention of the competition for her role in the film: a woman who was not only “gorgeous” but was also — just like Moreno — dating Marlon Brando at the time.

Saint asked Maltin his age: “65” was the answer.

Age is always a subtext at the festival, which this year also saw presentations by the 94-year-old Carl Reiner and 88-year-old Gina Lollobrigida.

“Our classics are cross-generational,” with TCM “always reaching out” to younger viewers, noted Dorian. The network has a strong presence on social media platforms, like Twitter and Tumblr, and is looking at market research on “co-viewing.” That's where viewers introduce a friend or family member to the classics -- a concept that could be incorporated into a possible 2017 event, according to a spokesperson.

Indeed, there were plenty of millennials at the festival, including UCLA and USC film students. Then there was the network’s youngest on-air guest programmer, the now-12-year-old Shane Fleming.

He was especially happy at the “Meet TCM” event to hear the topic of TCM’s second online course with Ball State University: slapstick comedy. “Yes!” he exclaimed, showing his delight with a jump up and down, a physical expression of emotion that the masters of slapstick would have approved.

Young Fleming, who introduced Chaplin’s “Modern Times” on air, had obviously learned from the best, thanks to TCM.