Radio Has Key Role in 2016 Election

In late March, Borrell Associates revised its projected political advertising spend for the 2016 cycle, adding $357 million to its previous total. While projected investment in digital advertising took a significant leap from previous estimates, the highest expected increase came from radio.

The report increased forecasted radio spend by 10.8%, from $827 million to $916 million. In a rapidly changing digital landscape, radio offers a stable and extensive reach throughout the country and across demographics.

Despite much stronger spending totals expected on TV (cable/broadcast) and digital, Westwood Media released a report earlier this month solidifying radio’s importance in the 2016 cycle.

While reach is a one-dimensional metric, radio’s ubiquity provides a central draw for advertisers searching for means to target unique demographic groups.

The Westwood report touts a weekly reach on radio of 225 million listeners over the age of 18, nationally.

The report cites GfK MRI data that show the “super politically influential” are “136% more likely to believe that radio is a good source of learning, is inspiring and keeps them informed.”

Again citing GfK MRI, data show radio to be by far the most trusted medium among those who are either “politically influential” or “super influential” when compared to TV, the internet, newspapers and magazines.

While radio does not appear as a primary source of political information, it keeps a steady significance across age groups. According to a Pew Research report earlier in 2016, 11% of 18-29 year-olds get the majority of their political information from the radio, with that number at 13% for Gen-Xers (30-49) and for boomers (50-64).

Lending weight to a focus on radio advertising, a 2014 poll by Vox Populi found that swing voters are 37% more likely to trust radio ads over digital ones, with registered voters trusting the former by a 60% margin.

Crucially, Independent or swing voters have ratings on oldies, news/talk, country and sports stations that all rate over 20% higher than the overall ratings for those genres.

The data points to a particularly attractive medium when targeting voters who could potentially decide a local, statewide or even national election. 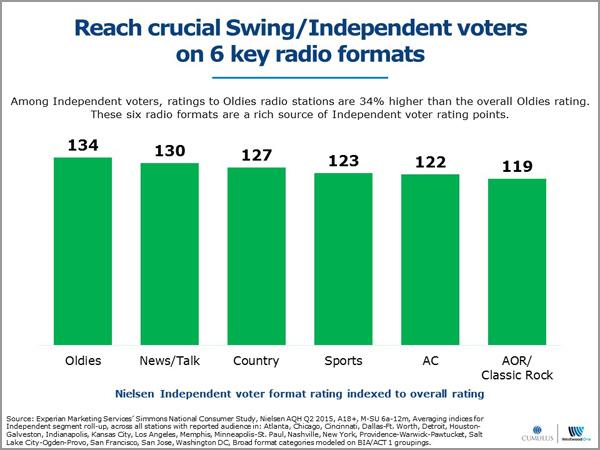