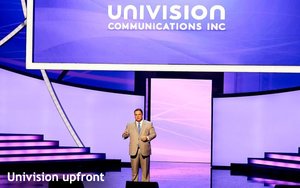 Univision announced a co-venture with Netflix that will have the two collaborating on a made-for-TV drama series about the life of El Chapo.

The Spanish-language TV network made the announcement as part of its upfront presentation Tuesday in New York.

Under the agreement with Netflix, the series will have its U.S. premiere in 2017 on one of Univision’s networks -- the younger-skewing UniMás – before becoming available on Netflix in the U.S.

The series will be produced by Netflix and Story House, a production unit of Univision.

The series, titled “El Chapo,” will be “based on the life story” of the Mexican drug lord, Univision said. El Chapo (aka Joaquin Guzman) is one of the most notorious criminals in contemporary Mexico. He is the head of a violent drug cartel famous for his brazen escapes from prison, and is currently in federal custody in Mexico.

Univision’s El Chapo project is the second TV production based on the drug lord’s life to be announced for Spanish television in less than a week. Late last week, Univision’s top competitor in U.S. Hispanic television -- NBC Universal-owned Telemundo -- announced that it is producing a drama series called “El Chema,” whose title character is based on El Chapo.

But most of Univision’s upfront presentation was focused on pitching the company’s many platforms to advertisers. The Univision-owned networks include not only Univision itself (referred to as “the mothership”), but also UniMás, the Spanish-language cable entertainment channel Galavision, the English-language cable channel El Rey, Univision Deportes (Sports) and others.

At the presentation, Univision executives reported audience growth from a year ago for most of its networks and promoted the group for its reach deep into the U.S. Hispanic community.

“Ninety-two percent of our viewing is live, so you know when your commercials are being seen,” he told the audience of ad reps. “Seventy-one percent of our audience is exclusive to us and doesn’t even watch any of these other networks,” he said.

“When you advertise on Univision, you’re reaching consumers you simply can’t get anywhere else,” Turner said. “And if that’s not enough, the viewers of our network are more likely to go to the opening weekend of a movie, have a greater intent to buy a new car in the next six months, are more likely to spend more at all kinds of retail [stores], are visiting quick-service restaurants more frequently and spending more per visit. In short, our viewers are your growth consumers,” he said.

Univision’s presentation at the Lyric Theater in Times Square was divided into four parts: sports, comedy, music and drama. While the company announced its new comedies and drama shows last week, it saved some announcements for Tuesday’s upfront.

One was that Saturday nights on Univision will be devoted to soccer starting later this year. “This will be a football fiesta like no other!” declared Juan Carlos Rodriguez, Univision Sports president when he announced the new “Sabado Futbolero.”

In closing the presentation, Steve Mandala, EVP of advertising sales for all the company’s networks, announced that the company has prepared a book of 22 case studies detailing how the company has worked with specific advertisers. “It’s available for you on our upfront Web site to download anytime today,” he said.

“The Univision network is, and always will be, our crown jewel, where our audience is the cord-keeper, not the cord-cutter, gathering en masse night after night to watch live TV and enjoy our second-screen companion apps,” he said. “They are loyalists, and loving us like no other.”
hispanics, tv, upfront
Next story loading