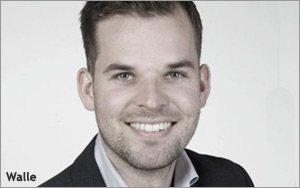 Seeking to capitalize on a growing market for mobile “beacons,” location-data startup Unacast has raised $5 million. The Series A financing round was led by European VC firm Open Ocean Capital.

“Unacast’s ambition is to redefine the proximity and advertising industry,” according to Thomas Walle, cofounder and CEO of Norway-based Unacast.

The company connects data sets to global ad platforms. In fact, through partnerships with Oracle, MediaMath, Opera and others, the startup claims to be the largest global aggregator of beacons. It currently boasts a network of some 1.4 million beacons and over 50 partners worldwide.

In recent years, beacons have evolved from on-site-ad-triggering systems to devices that can facilitate the collection of consumer location data, combined with analysis that can translate that into new behavioral insights.

Retail is the main focus of beacons today, notes ABI, and some contracts with beacon sellers are beginning to pass 1 million-units. By 2020, the number of working beacons is expected to surpass 400 million, worldwide, according to ABI.