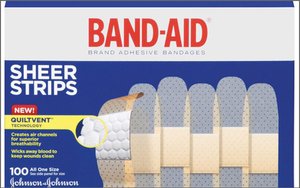 After a series of costly court rulings forcing it to pay millions of dollars related to cancer deaths and defective hip transplant parts, Johnson & Johnson is at its lowest consumer perception point in nearly three and a half years, according to YouGov BrandIndex.

On the upside, the negative feedback appears to be isolated to the parent company, and not seriously impacting two of its leading individual brands, Band-Aid and Tylenol.

“Tylenol and Band-Aid are the brand names that are most prominent on the packaging and advertising, so a good proportion of consumers may not be aware that J&J owns these brands,” YouGov BrandIndex CEO Ted Marzilli tells Marketing Daily. “The baby powder is branded with ‘Johnson’s’ Baby Powder, so there is a direct association with the parent brand. I suspect if we tracked Johnson’s Baby Powder, the brand would have taken an even larger drop than the parent brand.”

Johnson & Johnson just spent several months bouncing back to normal perception levels after a year-long slide from the second half of 2014 through the first half of 2015. That slow drop, where J&J’s perception was nearly cut in half, seems to have been fueled by continuous news about Ebola virus vaccine development and lawsuits being filed by women over talcum powder potentially causing ovarian cancer.

YouGov BrandIndex interviewed 30,000 adults age 18 and older over the past 15 months for this research, which has a margin of error of +/- 2%.

The company measured Johnson & Johnson, Band-Aid and Tylenol with its Buzz score, which asks respondents: "If you've heard anything about the brand in the last two weeks, through advertising, news or word of mouth, was it positive or negative?"

“The parent brand will survive and likely thrive. But the baby powder brand might never recover,” Marzilli says. “The lawsuits will likely continue to mount. There is a large and growing body of research suggesting a link between talcum powder use and increased cancer risks.”

Talcum powder is not a necessity and J&J faces a potentially long and costly battle to defend the baby powder brand.

“Maybe it will prove the research to be flawed,” Marzilli says. “But even if they win, some (likely many) consumers are going to stop using talcum powder. This may be a brand that J&J decides it would be better off without.”

This isn’t the first time J&J has been through a bout of negativity publicity. In 2010, the company implemented several recalls of Tylenol and other over-the-counter products.

“Those recalls were cited as a drag on sales in the company’s earnings,” Marzilli says. “Issues in manufacturing and distribution can be addressed and fixed. The baby powder crisis in a different type of crisis.”