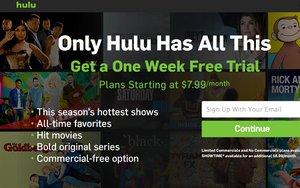 Wide reach among TV viewers remains a major factor for growing OTT services -- especially a possible new one from Hulu, which is owned by three major TV companies.

MoffettNathanson Research believes that Hulu has an advantage in building a successful national OTT service -- with access to a possible 40% plus the reach the four broadcast networks have as a core base.

But MoffettNathanson says the challenge is that broadcast networks do not control all its stations nationally. That creates a complicated scenario when it comes to networks’ OTT deals with their broadcast affiliates.

Next comes Discovery Communications at 9% followed by Scripps Networks Interactive at 5% and AMC Networks with 3%.

MoffettNathanson Research believes a Hulu OTT package could have a consumer price of around $40 a month, with a gross margin for Hulu owners of $6 a month.

MoffettNathanson Research says pure-play cable network companies -- Time Warner, A+E Networks, and Scripps Networks Interactive -- have been most active in adopting “skinny” OTT pay TV packages. Media companies that have broadcast networks along with cable networks can be more complicated -- because of their broadcast affiliate relationships.