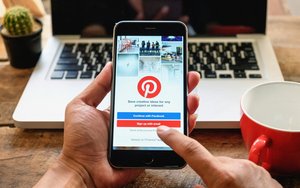 In the name of simplicity, Pinterest just renamed its “Pin it” button as a “Save” button.

The problem was that the word “pin” doesn’t make sense to many people, and especially those living outside the country.

“Now that more than half of Pinners come from outside the U.S., we want to make saving as easy to understand as possible,” a Pinterest spokeswoman said on Thursday.

“Feedback has shown that ‘save’ is the most easily translatable name for the product, and we’ve seen positive early results on comprehension, saving and engagement,” she said.

In fact, early tests have shown that users are saving nearly 10% more from the Pinterest Browser extension after changing the language to “save.”

With an eye on global expansion, Pinterest’s business prospects are looking brighter than ever.

During the first half of 2016, Pinterest is expecting international users to account for more than 50% of its overall audience, a source tells The Wall Street Journal.

Following the lead of Facebook and Twitter, Pinterest also recently began inviting every small- and medium-size business in the country to join its self-serve ad platform.

This year, Pinterest will have 54.6 million domestic users -- up 9% by eMarketer’s count. As has long been the case with the platform, the vast majority of is users (81.2%) are female.