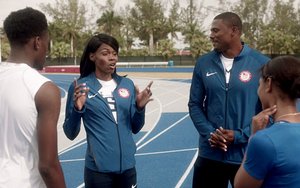 TD Ameritrade took a unique approach in informing U.S. Olympic hopefuls they were going to help fund their travel to watch the games in Rio.

The financial services company paired U.S. Olympians — all TD clients — and Tokyo 2020 U.S. Olympic hopefuls, having worked with the USOC and the respective National Governing Bodies to facilitate surprise meetings between the current and hopeful Olympians.

As part of the surprise, the U.S. Olympians shared that the hopefuls will all have the chance to go to Rio to cheer on Team USA and experience the games firsthand. These athletes -- along with Bob and Mike Bryan, three-time U.S. Olympic doubles tennis players -- will be featured in TD Ameritrade’s U.S. Olympic campaign, which uses the hashtag #likeyou.

TD Ameritrade is the only official U.S. sponsor to match U.S. Olympians with up-and-coming athletes who have their sights set on competing in Tokyo, working with the USOC and respective governing bodies to identify the hopefuls and establish these mentoring relationships.

Each hopeful will receive mentoring, education and training opportunities, as well as a trip to Rio to cheer on Team USA and experience the Games firsthand.

To pull off the reveal, the 2020 Team USA hopefuls were told they would be participating in a “special” training session. While working out, the young athletes were greeted by U.S. Olympians.

The campaign is designed to raise awareness about the tools and support available to help investors pursue their goals. While the 2020 U.S. hopefuls have a singular focus of someday competing in the Olympics, TD Ameritrade supports all investors working toward their own “someday” goal, whether it’s sending children to college, buying a dream house or retiring on a beach, says Denise Karkos, chief marketing officer, TD Ameritrade.

The #LikeYou campaign will feature a number of everyday TD Ameritrade clients as well as a roster of sponsored U.S. Olympians who also are long-time clients. These athletes use TD Ameritrade’s platform tools -- which are available to all clients -- for trading, investing and managing their portfolios. While U.S. Olympians can perform amazing athletic feats, TD Ameritrade levels the playing field when it comes to planning and pursuing financial goals.

Lowe and the Bryan brothers are active traders via TD Ameritrade while Zagunis, Boudia and Oliver are long-term investors.

“We chose the campaign theme #LikeYou because, like millions of individuals and families, these athletes are on a journey to fulfill their dreams both in competition and in their financial lives,” Karkos says in a release. “We will be cheering for them as they turn those dreams into achievements, just like we cheer for investors every day.”