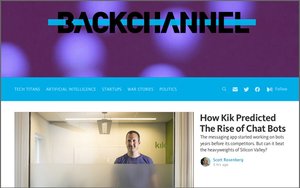 Condé Nast has acquired Backchannel, a tech business brand from social publishing platform Medium. Backchannel will continue to live on the Medium platform and will be ad supported through that platform, a similar model to Bill Simmons’ The Ringer.

A huge draw for Condé Nast to acquire Backchannel was to get its founder, respected tech business journalist Steven Levy, to return to the publisher. In 2014, Levy left his position as a foundering writer at Wired to launch Backchannel, one of the first publications built on the Medium blogging platform.

“We intend to make money,” Levy wrote in a blog post announcing the deal. “At Medium, Backchannel hosted a few experiments in sponsorships. Now it’s for real.”

The formation of Wired Media Group gives Condé Nast scale, helping it sell digital advertising. The publisher has formed other groups with its brands, like the Food Innovation Group, which includes titles such as Bon Appétit and Epicurious.

According to The Verge, Backchannel is one of the last of the major sponsored publications built on top of Medium’s publishing platform. Comics web site The Nib split with Medium in 2015, while Archipelago and The Message have both shuttered.