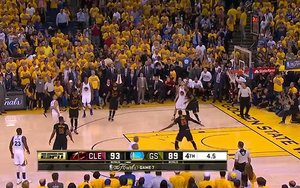 For the NBA Finals, ABC scored the best ratings for an NBA game since 1998, and for the NBA Finals series overall, pulled in nearly $280 million in national TV advertising.

The entire Cleveland Cavaliers-Golden State Warriors series pulled in $279.3 million -- some 120 brands, with 223 commercials with 594 national airings, according to iSpot.tv.

ABC pulled in a Nielsen preliminary 18.9 household rating, 25 million overall viewers, and an 8.8 18-49 rating for Game 7 of the NBA Finals, with the Cavaliers winning the first close game of the series, becoming for the first time NBA champions.

The household ratings were the highest ratings NBA game since Game 6 of the Chicago Bulls/Utah Jazz NBA Finals in 1998 (22.9), and the highest for Game 7 of the NBA Finals since New York Knicks/Houston Rockets in 1994 (20.2).

Game 7 was also higher than the most recent Game Seven NBA Finals game between the Miami Heat and the San Antonio Spurs, which pulled in a 17.7 Nielsen household rating.