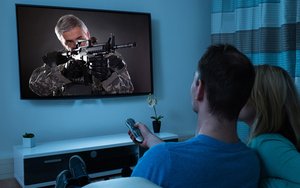 TV upfront selling is nearly wrapping up for some networks -- with CBS and NBC virtually done, and others closing in as well.

Media executives say CBS is up 3% in upfront dollars versus a year ago, with average pricing for prime-time non-sports programming posting low double-digit percentage increases -- 10% to 12% -- in the cost per thousand viewers [CPMs].

Strong upfront advertising categories include retail, telecommunications, financial and pharmaceuticals. A CBS spokesperson had no comment on upfront activity.

Media executives also says NBC has concluded the majority of its upfront deals -- for both broadcast and cable. Like CBS, NBC has also been inking deals at low double-digit CPM gains. Fox is more than halfway done, getting around 8.5% to 12% CPM hikes, according to executives.

NBCUniversal’s CEO Steve Burke said at a recent industry event a week and half ago: “What we found was that, on a CPM basis, NBC was getting 20% less than Fox or CBS.”

He adds: “For the same number of eyeballs, we would get 20% less, and that happens when you are consistently under-performing. Once you get to be No. 1, you can eat away at that — and we're seeing that with the upfront right now.”

An NBC spokesperson had no comment on Monday concerning the upfront market.