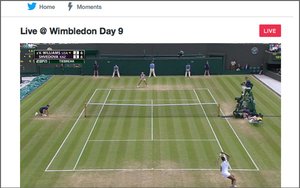 Showing the world that it’s more than tweets, Twitter on Wednesday launched a live-video stream of ESPN’s Wimbledon coverage.

To drum up excitement, Wimbledon’s official Twitter account tweeted the live feed, early Wednesday. Presently, there is no sign of advertising on Twitter’s Live video page, but analysts say that is sure to change.

“We expect direct monetization to follow,” Nitesh Patel, a director at Strategy Analytics, notes in a new report.

The launch is part of a broader video strategy by Twitter to reinvigorate its relationship with users and brand marketers.

“We see a clear opportunity to increase our share of market, particularly around video,” Adam Bain, COO at Twitter, told analysts on an earnings call, earlier this year.

To than end, Twitter won the digital rights to NFL games on Thursday Night, at the beginning of the year.

Come this fall, Twitter plans to stream 10 Thursday Night football games while they are simultaneously being shown on NBC, CBS and the NFL.