Analyst: TV Upfront Is Healthy, But Effects Could Be Short-Term 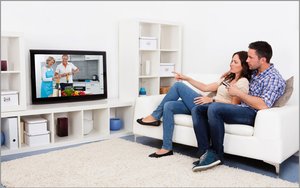 Although the TV upfront market seems strong to many, one analyst says this could be short-lived for advertising selling periods going forward, as a result of long-term advertising factors.

TV advertising as it relates to GDP growth and industrial production has been getting “weaker,” says a Barclays Research report. And in the next two to three years, this could accelerate for cable TV networks.

For example, the ratio of advertising-to-U.S. gross domestic product has been falling for over a decade, given the “deflationary effect of digital advertising.” The ratio is now between 0.9% and 1.0%, falling steadily from a high of 1.4% and 1.5% in 2000.

Although TV executives have been proclaiming that ad money is coming back to traditional TV from digital this year, Barclays disagrees, saying “television’s share of total advertising has fallen over the last few years.” TV advertising has seen compounded growth per year of 1.6% from 2011 to 2015.

Barclays warns there could be “weaker than expected political spending” as well as continued emergence of new digital distribution TV models. This is especially true for the highly valuable sports TV programming, with new platforms developing, such as “Thursday Night Football” on Twitter.

But it adds: “It should be noted that we do not mean to imply a trend based on these data points, as it is unclear what price levels actually indicate in terms of mix of volumes.”

Overall, the report says, it is “tough to extrapolate upfront results.”