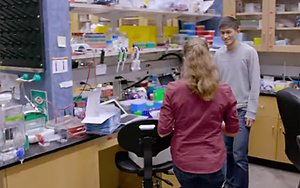 Microsoft and the University of Washington (UW) researchers have found a way to store 200 megabytes of data on synthetic DNA strands.

The biggest problem with collecting and storing data, from search to images and videos, is the world is running out of room, similar to the way the Internet, which once operated on IPv4, ran out of IP addresses to connect devices to the Internet. The move from IPv4 to IPv6 allowed companies to find new ways for advertisers to reach consumers.

The results from the research proves a viable source for storing the mounds of data advertisers and other industry produce daily.

Once encoded, the 200-MB of data occupies a spot in a test tube smaller than the tip of a pencil, explains Douglas Carmean, the partner architect at Microsoft overseeing the project.

Mike Brunker, contract editor for enterprise news at NBC News, who wrote the blog post for Microsoft Research, calls the technology "fascinating. A few really smart people getting together and saying this is worth chasing and then Microsoft throwing its support behind them," he told SearchBlog.

The promise of DNA storage is huge, once scientists find a way to scale the technology and overcome a series of technical hurdles. It means massive amounts of data being compressed into a few sugar cubes or all the publicly accessible data on the Internet put in the size of shoe box, about 700 Exabyte, according to Brunker's blog post.

Digital versions of art, such as a high-definition music video by the band OK Go!, the Universal Declaration of Human Rights in more than 100 languages, the top 100 books of Project Guttenberg and the nonprofit Crop Trust's seed database are some of the content stored on the molecular DNA strands.

The amount of data continues to grow exponentially.

"The growth is truly astounding," said Peter Lee, corporate VP at Microsoft, in a video. "It's not only challenging creating new technologies, but actually inventing the new science to form a foundation for the future."

How does someone encode digital data made up of 1s and 0s in building blocks of DNA? The explanation is found in a post on the University of Washington Web site.