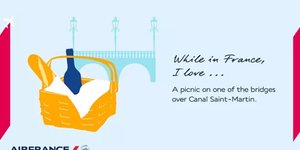 Air France is launching a summer campaign and sweepstakes.

With the theme “Mon Voyage,” the effort encourages travelers to share what they love most about visiting France.

Running through July 28, the campaign aims to inspire travel to France by underscoring the enchantment of the country with its rich history, stunning landmarks, outstanding cuisine, and picturesque countryside; and provide people a chance to win one of three trips to iconic French destinations — Paris, Nice, and Bordeaux, according to the airline.

The promotion was inspired by actual favorite travel experiences to France that were relayed to Air France through its social channels by its fans. Air France selected 20 of these experiences and animated them through custom colorful illustrations on a microsite.

Trips include two round-trip tickets on Air France and a four-night stay at a hotel provided by Accor Hotels. Weekly winners will be selected randomly at the end of each sweepstakes period.

The airlines’ previous promotions this year have focused on the Cannes Film Festival and a French film festival in Japan.