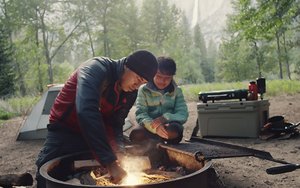 REI is attracting viral attention with its subtle advertising campaign that encourages people to "make home" by going outdoors to camp. The latest film - “Make Home in Yosemite Valley" - has been viewed nearly 240,000 times on Facebook since it debuted last week.
The 2:30 clipfollows a father, Naldo, originally from Guatemala, and his daughter, Rubie, on a camping trip at Yosemite, highlighting the idea that "no matter where you come from, you make home wherever you go with the people who matter most," said the agency.

The Rokkan Los Angeles-produced film, which promotes diversity and acceptance, is part of REI’s ongoing national #LetsCamp campaign. Although camping products are featured throughout the video, there are no specific references to products nor does the outdoor retailer prominently promote its brand in the clip.

"The concept of diversity couldn’t be more relevant than it is right now," says John Noe, CEO/co-founder, Rokkan. "That despite where we’re from or how we were raised, 'home' is wherever we make it with the people who matter most in our lives. This film is focused on a more multicultural demographic. We wanted to illustrate the idea of what 'home' means to people of a foreign place.

'The connection to a constant journey in search of home, the role of unspoiled nature, and the legacy that they aim to pass down to new generations, paint a very different picture of what it means to make home."

This film appears on REI’s Facebook and YouTube channels. "So far, the public response on social media—Facebook in particular—has been overwhelmingly positive. Fans of REI are happy to see the brand embracing diversity in America," says Noe.

REI is savvy for its ability to leverage free media attention. Last year, the retailer score massive buzz with its #OptOutside campaign to celebrate its closing during Black Friday.