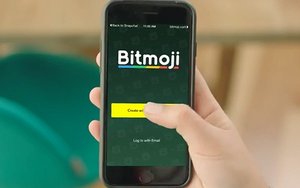 As was widely reported, Snapchat bought emoji maker Bitstrips back in March.

The social giant isn’t saying how much it paid for the startup behind Bitmoji, but the figure is believed to be in the range of $100 million.

Bitmoji lets users create their own personalized emoji, which are supposed to resemble their creators. The cartoon-like caricatures can then be used in messaging apps to express feelings, communicate, or just look silly.

Snapchat is encouraging users to link up their Bitmoji accounts, at which point their avatars will appear in the app.

If a user doesn’t have Bitmoji already, you can log in with Snapchat to set one up. As a wonderful or terrifying bonus, depending on your perspective, If users’ friends have Bitmoji linked to their Snapchat, they will also be able to ‘Friendmoji’ them. In other words, people can use their friends personalized emojis however they like.

Indeed, comScore estimates that 38% of 25-to-34-year-old U.S. smartphone users are now on Snapchat -- up from just 5% three years ago, which means it's officially breaking into the mainstream.

Of course, the majority of Snapchat users are still relatively young. Overall, about 69% of 18- to-24-year-old U.S. smartphone users are on Snapchat -- up from 24% three years ago.

That said, the new archiving feature will likely appeal to Snapchat’s growing audience of older users.

“Snapchat isn’t showing any signs of slowing down, so I would expect to see them continue to grow their audience across all demo segments,” Adam Lella, senior analyst at comScore, recently told Social Media & Marketing Daily.

“Of course, the 18- to-24-year-old segment is already nearing full penetration, so growth there might naturally slow,” Lella noted.

He expects much of the growth from older millennials, 25-34, which has caught on slower than younger Millennials, adding it is “an audience that likely has an easier time understanding the product’s appeal (vs. 35+).”