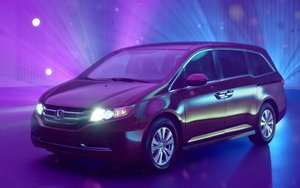 Honda is launching six music-themed videos that focus on the love-at-first-sight feeling that happens when someone finds their dream ride.

The videos feature the Honda Accord, Civic, CR-V, Fit and Odyssey, are running across TV, digital media and social channels. Dubbed "Now Is the Moment," the integrated campaign from RPA runs through Sept. 5 and includes print, radio and dealership materials.

Each execution involves a fantasy sequence with a hit song interpreted by a different singing group. The Accord video features sharp, cherry-suited rockers singing a doo-wop version of a top pop song. The Civic video creates a classic 1960s girl group to interpret a hit ballad.

For the CR-V and Fit videos, the soul of gospel-singing idols re-imagines an '80s masterpiece. The Odyssey video features a children's choir in America's most popular minivan singing a charming rendition of a well-known rocker tune. A multi-vehicle video features an angelic boy-band group clad in white rising above the floor.

National media include network broadcast and cable networks (ABC, NBC, CBS, Fox, ESPN, Discovery, CNN, HGTV), with additional Hispanic Honda Summer Clearance Event spots to air on Univision, Telemundo and Fox Deportes. Video content will be featured in national cinema and online. Spot TV will support all 210 DMAs/regions with an emphasis on regional sports. Digital media efforts surrounding the campaign will include search and social. The Honda Summer Clearance Event will also include radio efforts and be featured in local newspapers and national magazines.

The campaign’s goal is to “break through the car sales-event clutter and remind people that summer is the best time to get a great deal,” says Susie Rossick, assistant vice president of marketing at American Honda Motor Co., Inc.

The music choices for the current round of spots are “infectious” songs: “Crazy in Love,” “My Life Would Suck Without You,” “Head Over Heels” and “I Was Made for Loving You,” Rossick says.

“Music is an integral part of our marketing strategy,” she says. “The Honda Civic Tour is celebrating its 15th anniversary, with this year’s tour in full swing. Our current artists include Demi Lovato and Nick Jonas.”