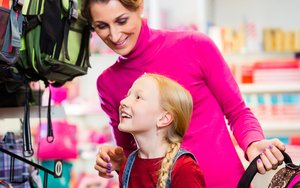 Feeling more confident about the economy, parents seem to be spending more freely on back-to-school shopping this year, with the National Retail Federation forecasting a 9.6% increase. It expects parents of kids in kindergarten through high school to dole out $673.57 on clothes, accessories, electronics, and school supplies, up from last year’s $630.36. Total spending is expected to hit $75.8 billion. A similar survey from Deloitte anticipates much lower spending, at about $488.

“Families are still looking for bargains, but there are signs that they are less worried about the economy than in the past,” says CEO Matthew Shay in the release. “Heading into the second half of the year, we are optimistic that overall economic growth and consumer spending will continue to improve as they did in the first two quarters of the year. We fully expect retailers to be aggressive with offering great deals both in stores and online for back to school shoppers.”

By category, the NRF survey, conducted by Prosper Insights and Analytics and based on some 6,800 responses, predicts 96% of parents will purchase school supplies, spending about $4.37 billion; 95% will buy clothing, shelling out about $9.54 billion, and 57% intend to score electronics, to the tune of some $8.27 billion.

As online shopping continues to grow, with 46% planning to shop this way (way up from 36% last year), discount stores are losing clout. Although they are still the most popular choice, just 61% say they are planning to shop there. (That’s the lowest in the survey’s history.)

The Deloitte forecast, based on online responses from some 1,200 parents, calls for much lower spending. But it predicts that those who start shopping earlier are likely to spend 26% more than those who lollygag.

It also detects a greater shift toward online purchases, with 30% of its survey saying they plan shop less in physical stores in favor of buying supplies online. And 61% say they plan to research online before shopping, with 25% intending to use social media for sales and promotions.