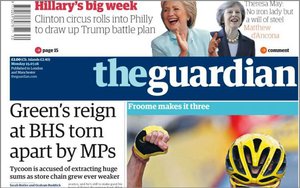 The Guardian will cut its weekly media coverage in print from two pages to one, the company announced, following reports that Guardian Media Group is poised to reveal this week an operating loss of £69m (or $90.5m) in the year ending March 2016.

That loss exceeds its earlier estimate of £58.6m ($76.9m) of losses, according to figures circulated to senior executives and obtained by The Financial Times.

The Guardian’s media coverage has been a cornerstone of the publication since its launch in 1984, eventually growing to a weekly supplement called MediaGuardian, which at one point had more than a dozen pages of content in the 1990s. MediaGuardian.co.uk launched in 2000.

According to Business Insider, a Guardian spokesman said: "As part of our three-year plan, we're looking at addressing costs in all parts of the business and as such we've decided to reduce our print media section on a Monday from two pages to one.”

Guardian Media Group (GMG) has yet to comment on whether these cuts will also affect media coverage on The Guardian Web site.

Roy Greenslade, who has written a politics, news and media blog for The Guardian since 2006, told The Financial Times: "Any diminution of media coverage at a time of immense change in the media landscape is to be regretted."

Multiple sources claim an aggressive expansion led by Alan Rusbridger, The Guardian’s former editor-in-chief, as a main culprit of GMG’s finances. The company’s total staff numbers increased by 480 over three years to 1,950. Rusbridger resigned in May 2015.

In print, The Guardian is now the lowest-selling UK national newspaper, with an average daily sale of 172,000.

The Guardian’s new Editor in Chief, Katharine Viner, will likely try to centralize the editorial operation. In an effort to improve its economic conditions, GMG exceeded its target of cutting 250 jobs recently; at least 70 journalists took voluntary redundancy.

According to the Financial Times report, one media reporter has resigned and another could report to the business desk as part of an editorial reorganization.

The Guardian is also in the process of setting up its digital editions in the U.S. and Australia.

A silver lining? The shocking Brexit vote, which gave a boost to national newspaper sales across the U.K. The Guardian’s circulation increased by 3.63% in June, with 167 million monthly unique browsers.
media, news, newspapers, uk
Next story loading