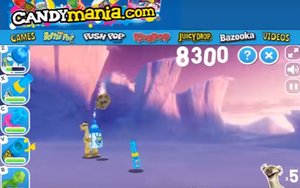 Bazooka Candy Brands reports that an online game it created as part of a tie-in deal with the summer flick “Ice Age: Collision Course” has pulled more than a half-million plays in under four weeks.

The multi-level game, Candymania, can be played exclusively on a dedicated site. The site carries a “Hey kids! This is advertising!” message on the bottom of the homepage.

Set against a backdrop of scenes from the film, game players select one of four of the movie’s characters and then choose one of five Bazooka Candy Brands products to help save the earth. A bonus level featuring the acorn-obsessed character, Scrat, will be unlocked once the game receives 1 million plays.

The tie-ins are being promoted with a 15-second TV spot that’s being aired on Nickelodeon, Cartoon Network, Nick Toons, Teen Nick and Boomerang, plus, on digital, Cartoon Network and SuperAwesome Network.

The spot/video is also being featured on the Candymania site and in posts on the Instagram, Facebook and Twitter channels of several of the candy brands.

The campaign, which also includes online advertising and retail display merchandising, was created by agencies including Uproar!, Walrus, Blit and (on PR and social media) Rogers & Cowan.

The company also partnered with 20th Century Fox and its Blue Sky Studios for the third and fourth installments (in 2009 and 2012, respectively) in the “Ice Age” series – which, with $2.8 billion in worldwide box office sales, is the second highest-grossing animated film franchise of all time.

“The fun and family-friendly nature of the characters in the Ice Age franchise is a natural fit for Bazooka Candy Brands,” notes Nicole Rivera, marketing director, North America confections.