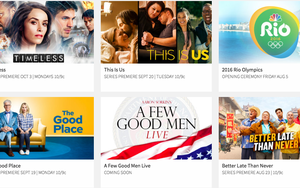 NBCUniversal has completed its prime-time upfront negotiations, posting a strong 12.5% increase in the cost per thousand viewers -- the last of the major broadcast network groups to complete upfront deal-making.

Brian Roberts, chairman/CEO of Comcast, said this to analysts during its second-quarter earnings phone call on Wednesday.

“We've got a differentiated story versus our peers,” says Roberts. “Part of our success and leadership comes from a unified approach. We go to market as one company.”

Steve Burke, CEO of NBCUniversal, said the price per thousand viewers (CPMs) for its cable networks were also strong, on par with the NBC broadcast network -- 13% gains for USA Network; 12% for E! And 10% for Bravo. Overall, NBCU cable networks were up double-digit percentages on pricing.

Burke said the NBC networks sold 10% more of its ad inventory for broadcast and 5% more for its cable networks. NBC broadcast network sell-out levels were around 75% to 80%. Burke said there is plenty of inventory left for sale and what he calls a strong scatter ad marketplace.

Last year, all broadcast networks took in $8.36 billion in upfront deals, with $9.45 billion for cable TV networks, according to Media Dynamics.

Burke also said that NBC closed the 20% CPM pricing gap between it, Fox and NBC. For 2015-2016 TV season, broadcast TV networks averaged prime-time CPMs of $24.40 for viewers 18 years and older, according to Media Dynamics. Cable TV networks were at average $13.34 CPM.

“Big advertisers realize that digital is an important part of the mix,” said Burke. “But if you have a major product launch, you really, really have to look at big events on broadcasting and cable television that can provide reach and depth.”