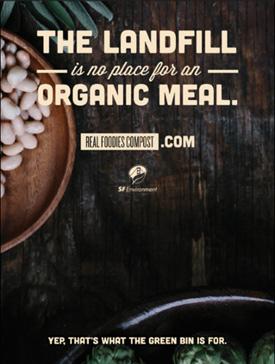 San Francisco is deploying an ambitious new campaign to try to get Millennials, in particular, to put their money where their mouths are (so to speak), when it comes to sustainability.

It seems that the city known for its liberal politics and progressive causes, including environmental preservation, has run out of landfill.

In response, the San Francisco Department of the Environment — one of the nation’s leading recycling advocates — asked its ad agency, School of Thought, to create a campaign to help persuade residents to go the extra mile to compost their food waste.

Let’s face it: Composting is, well…a bit of a grind. So the challenge was to find a way to make people want to compost.

The solution, to link composting with the “foodie” lifestyle, is based on demographics and psychographics, according to the agency. The campaign’s tagline: “Real Foodies Compost” (#realfoodiescompost).

The team decided to focus on targeting Millennials, because many are new residents, and so less familiar with the city’s recycling needs.

That was followed by the insight that a large percentage of these new SF Millennials either are -- or aspire to be -- foodies. In other words, foodies per se are not the campaign’s target; rather, the foodie lifestyle is the hook to inspire action among young adults.

Via headlines like “Farm to Table. Table to Bin. Bin to Farm,” the advertising connects healthy and organic eating with sustainable recycling practices.

One element is a video with original music that begins: “It’s not enough to love the way food tastes. You gotta love a little more, and make no waste...”

The video, in 15-, 30- and 40-second (see below) versions, is being used for pre-roll, as well as on the campaign’s microsite (realfoodiescompost.com) and on Facebook and Instagram, along with promoted posts.

The microsite encourages users to compost all takeout, as well as home-prepared meals and snacks, and provides an easy guide to composting and recycling. It also offers shareable content, including recipes, challenges, top 10 lists, images and GIFs.

Naturally, there is a social influencer component, employing SF residents with cultural clout, as well as sustainable principles.

Three different 4’ x 5.5’ ads (one shown above) are being featured at 15 transit shelters, concentrated in gentrifying neighborhoods.