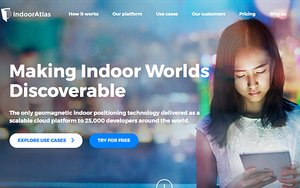 IndoorAtlas, a geomagnetic indoor positioning platform, announced that it has received $2.46 million (or €2.2 million) from the European Commission Horizon 2020 grants program.

Horizon 2020 is a European grants program that is focused on driving economic growth through technological innovation. The program has about €80 billion available for funding.

IndoorAtlas’s team discovered that each modern building has a unique geomagnetic signature that can be read by the sensors in a smartphone, allowing for accurate location positioning in enclosed spaces. Essentially, the earth generates a magnetic field, and each structure erected on the earth carries its own magnetic signature that can be detected through a phone’s sensors.

Developers can use the software platform to incorporate indoor positioning into their apps — which can also be used in three dimensions due to the nature of magnetic fields. It is accurate to within two meters, and it can be used without the prohibitively expensive investment in hardware or infrastructure that beacon and WiFi solutions typically call for.

Yahoo! Japan recently partnered with IndoorAtlas to map many indoor locations across the country.

High smartphone penetration and a mobile-first generation makes Asia IndoorAtlas’s most bankable region, but the recognition of their technology’s potential by a European group will most likely be a business boon to them.

IndoorAtlas currently works with about 25,000 developers.