Ongoing civil litigation between Criteo and SteelHouse has brought a few clients into the fray. Sworn testimony recently surfaced from SteelHouse customers such as Deckers Outdoor, TOMS, and Vistaprint, among others, explaining how they were misled while working with the company.

Original court documents describe a counterfeit click game that tricks clients into believing that Internet users are clicking on SteelHouse-placed ads when they are not. It allows SteelHouse to take credit for online sales attributed to another vendor, according to the documents -- in some cases, Criteo.

With help from Criteo, one brand identified that directly after a click on a different marketing channel, SteelHouse would frequently fire its own code. Since TOMS tracked clicks on Google Analytics, when SteelHouse fired this code, it was interpreted by the TOMS platform as a click on a SteelHouse advertisement, according to documents filed August 15, 2016.

Under TOMS' last-click attribution model, if SteelHouse fired its code interpreted as a click after a Criteo click, SteelHouse would get the credit for the conversion.

In the declaration provided by Anna Hordov, who served as a paid advertising and affiliate coordinator at TOMS from February 2012 to January 2013, she describes what happened during a time when TOMS used both SteelHouse's and Criteo's services.

Interestingly, SteelHouse would sometimes outperform Criteo, but then the brand stopped using Criteo for a short period of time, SteelHouse did not increase the volume of click and post-click conversions, and all remained the same.

Several brands filed declarations in support of Criteo. In the declaration, Elyse Burns, lead channel marketing at Vistaprint, filed in support of the plaintiff Criteo, saying she first became aware of SteelHouse's click data when Criteo's employees notified her team of data irregularities with Vistaprint clicks. In April 2016, she observed SteelHouse using code to make it appear as though an Internet user clicks on a SteelHouse-placed advertisement even though no such click occurred.

Burns navigated to the Vistaprint site by conducting various searches in a search engine and then by clicking on an organic search result. "I did not click on a SteelHouse advertisement," according to the declaration. "At no point did I navigate away from the VistaPrint Site after reaching it by clicking on my search results."

The Motion for Preliminary Injunction is scheduled for Sept. 12, 2016, when the presiding judge will review the statements from SteelHouse clients. Criteo began this litigation when it asked the court to instruct SteelHouse to discontinue its deceptive "counterfeit click scheme." SteelHouse opposed that motion and filed counterclaims against Criteo. Both companies say they tried to avoid taking the disagreement to court.

Criteo claims that SteelHouse uses software making it look like users click on their ads, even when they don't. Recently Criteo filed a brief responding to SteelHouse and a second brief asking the court to dismiss SteelHouse’s counterclaims. Then brought clients into the mix as evidence of wrongdoing.

SteelHouse also had something to say about the comments. "Criteo’s response in its latest filing finally frames the actual debate at hand without the inflammatory accusations," according to a SteelHouse spokesperson. When you boil it down, the debate is about flexibility. SteelHouse offers flexible attribution support; Criteo doesn’t.” 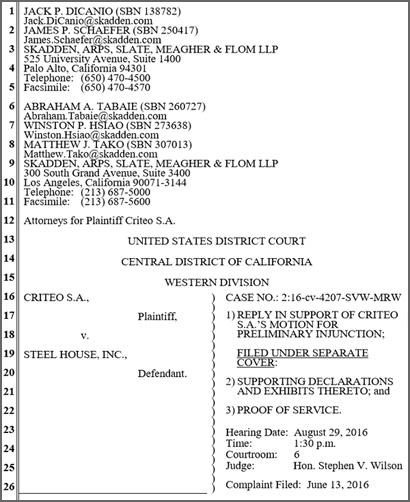