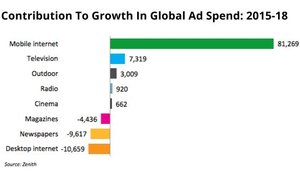 Citing stronger growth-than-expected in the U.S., Zenith (part of Publicis Groupe) has upgraded its global ad-spending outlook for the next several years. Global advertising expenditure will grow 4.4% this year to reach $539 billion -- ahead of the 4.1% previously forecast in June, the media agency is now predicting. The latest forecast was released today.

Zenith has also upgraded its spending prediction for the next two years, with spending expected to grow by 4.5% in 2017 and 4.6% in 2018 – up from the previous growth forecasts for both years, which were 4.3% and 4.4%, respectively.

By 2018, global advertising expenditure will total $589 billion -- $4 billion more than forecast in June.

The stronger-than-expected U.S. growth is being fueled by robust consumer spending, leading marketers to compete more aggressively to maintain market share, per the forecast.

“We expect US network TV to return to growth this year (at 1%) after shrinking 5% last year, thanks to new spending by pharmaceutical and consumer packaged goods companies and a strong upfront,” Zenith stated. “We also expect social media to accelerate from 32% growth last year to 35% growth this year, as advertisers take advantage of new formats, such as in-feed video, and the transition to mobile internet consumption continues.”

The agency slightly downgraded spending for the UK this year as the country prepares for the Brexit transition. The new growth forecast: 5.4% versus the previously projected 5.6%.

But the worst is probably yet to come for the UK’s declining spending growth given the long-term Brexit impact, Zenith stated.

“Most of the impact that Brexit will have on the UK ad market will come in the long term. The UK’s new terms of trade with the EU and other countries -- whatever they turn out to be -- are likely to restrict flows of trade and investment in comparison with the pre-Brexit status quo, leading to slower economic growth and slower growth in advertising expenditure. In the short term, uncertainty about the consequences of the vote will make companies less likely to invest in new products, and consumers less likely to take on big spending commitments. This could lead to anything from disappointingly slow growth to outright recession. Our current forecasts assume that economic growth will slow but remain positive, in which case UK adspend will grow 3.4% next year, down from our pre-vote forecast of 4.0% growth."