Curacao Rolls Out The Red Carpet 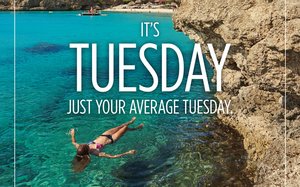 The Caribbean region is competitive with popular destinations Aruba, the U.S. Virgin Islands, Cayman Islands and Bermuda all chasing after the same visitor. Now, for its first major awareness campaign in over a decade, the Curaçao Tourist Board (CTB) has teamed up with New York-based agency Catch to make the island top of mind as a Caribbean destination.

The "Right Now in Curaçao" is designed to showcase the island's diversity, including its 35 beaches, diverse heritage spanning 55 different cultures, European architecture as well as hiking trails, historical landmarks like the UNESCO world heritage site, a Latin and Dutch influence and local culture. And, unlike some of its competitors, Curaçao also happens be outside of the hurricane belt.

“The 'Right Now in Curaçao' Campaign was created to challenge our target to hold up a mirror to their own lives,” says Douglas Spitzer, partner and chief creative officer, Catch.  “We’re pretty sure no matter what else potential visitors are doing in the moment they see our ads, it’s nowhere near as exciting, or enriching, as what the island offers them."

In all, the campaign's multi-platform media approach includes digital, social and out-of-home prominently featured around New York City and the transit system including subway, Long Island Rail Road, and Metro North, as well as Terminal 5 at JFK. The launch of the campaign is focused on the U.S. as Curaçao seeks to build U.S.-based travel. The campaign will expand internationally by the end of year.

To help support this initiative, the CTB and the Rosen College of Hospitality at the University of Central Florida have compiled a 128-page Tourism Master Plan 2015-2020.

One key priority is to increase arrivals from the U.S. American tourists spend the most per day per person at $148.40 compared to the Venezuelan/Colombian tourist at $105.80, and Dutch tourist of at $71.40, says CTB's research. By 2017, the goal is to grow the current level of airlift by 10 weekly flights from the 2015 baseline of 24 in order to attract 100,000 additional tourists.

The initiative comes as JetBlue, the only airline traveling direct from NYC to Curaçao, prepares to add a third weekly flight out of New York this November, resulting in Catch New York and JetBlue working closely together to align messaging. American Airlines also services the island.

Catch New York also is partnering with the travel publication AFAR to build customized programs through an on-island ambassador program which will showcase the “Right Now in Curaçao” first-hand experience with dedicated editorial content across all digital platforms and social media.

"We asked Catch to look beyond what's ordinary in the category, and bring to life work that embodies everything amazing and beautiful that happens across Curaçao every day," says André Rojer, marketing manager, CTB. "'Right Now in Curacao’ will entice U.S. travelers by showcasing the island’s rich cultural mix and its broad range of activities through a multi-platform media approach.”

According to the Master Plan, the marketing costs for acquiring one tourist is approximately $38.00, while the return on that investment equates to an average $925.50 per person, says the CTB.

Catch won the Curaçao business in a search conducted by the Curaçao Tourist Board in June. There was no immediately previous creative agency of record.