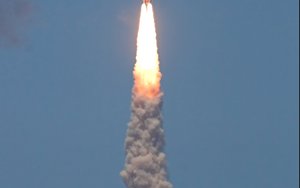 After reporting on Salesforce’s acquisition of Krux, I got an unusual number of pitches from other suppliers who wanted to associate their names with the news, including one from Rocket Fuel CEO Randy Wootton. That caught my attention, because Krux CEO Tom Chavez referenced rocket fuel as part of the reason he sold Krux to Salesforce.

“We're trading gas for rocket fuel,” Krux stated, referring not to the proper noun, but the common one.

My first reaction to Chavez’s statement was, “What an interesting choice of words,” given how people in the programmatic ad business would likely associate it with a company he competes with, subliminally, if not explicitly.

I know what you’re thinking -- that Rocket Fuel doesn’t compete directly with Salesforce. Well no, not explicitly. At least not in a way that would put them in the same cell on a Lumascapes infographic. In fact, Lumascapes segments Rocket Fuel as a targeted ad network or an audience management platform, while  Salesforce is categorized as “sales automation.” But in the not-so-linear world of marketing technology, the true nature of these suppliers is blurring and defies any absolute categorization.

Both companies compete for the chance to have marketers invest budgets with them in hopes of generating higher returns for reaching and influencing consumers. And now, both companies own what previously was an independent data management platform (DMP) as part of their offering. Salesforce just bought Krux for about $700 million. Two years ago, Rocket Fuel bought [x+1] for about $230 million.

Aside from participating in an ongoing land grab for independent DMPs, the two companies understand that regardless of what your technology and machines do for marketers, it’s all about the data that fuels them. Or as Chavez suggests, would you rather be cooking with gas, or with rocket fuel?

Never mind the fact that one of those forms of fuel would blow up your house. When you’re creating metaphors that resonate on Madison Avenue and Wall Street, the sky’s a better limit.

Or as Rocket Fuel’s Wootton commented, the “ongoing convergence of advertising and marketing technologies” is all about enabling marketers to understand what returns they’re getting on their marketing investments.

“[They] want to know what’s working and don’t want to leave any stone unturned,” he explained, adding, “The best way to accomplish this is through a combination of Big Data and machine learning.”

Of course, that’s exactly what Rocket Fuel has been pitching ever since it began selling data and technology to marketers, so it’s not surprising that Wooten would use the Salesforce/Krux deal as validation.
big data, dmp, programmatic
Next story loading