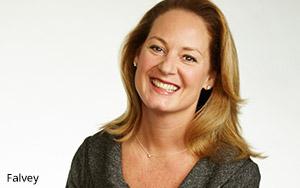 Mcgarrybowen is promoting Maureen Falvey to managing director, head of account services for its New York office. The position is new. Falvey has been with mcgarrybowen since 2014, running the United Airlines account and heading its Procter & Gamble business.

Her new role will include setting the direction for account services, improving cross-team integration and collaboration within the Dentsu Aegis Network, as well as recruiting talent. She reports directly to mcgarrybowen U.S. CEO Simon Pearce.

Falvey has spent the majority of her career working with global consumer packaged goods marketers including P&G, General Mills, and Unilever. Prior to mcgarrybowen, she spent 14 years at Saatchi & Saatchi on General Mills, Kitchen-Aid, and Novartis.

At mcgarrybowen, she co-launched a mentoring program and a mother’s network, called ‘the maternal order of mcgarrybowen.’

"Her stewardship of client relationships and attention to staff development has fostered an environment where better ideas can be delivered more efficiently and effectively for our clients," says Pearce. "Maureen builds partnerships that allow us to do our best work.”