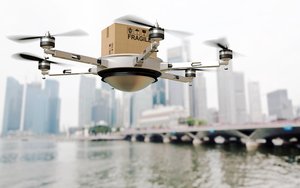 Many IoT-in-the-sky advancements are underway by retailers and cellular networks and now a new study shows the attitudes U.S. consumers have toward drone delivery.

The primary benefit consumers see from drone delivery is one-hour delivery, but they also are concerned about the stability of autonomous deliveries, according to the study by the United States Postal Service Office of Inspector General.

The study, comprising a survey of 1,207 U.S. adults, found that the majority (75%) expect to see drone delivery within the next five years.

However, the general sentiment toward it is more fragmented. Almost half (44%) of consumers say they like the idea of drone delivery, but almost as many (34%) dislike it. Nearly a quarter (23%) said they are neutral.

Most (66%) consumers have some level of awareness of drone delivery and the majority (70%) of that awareness is associated with Amazon. The next most associated (19%) brand is Google.

Amazon was also rated as the most trusted brand for making drone deliveries and Google was ranked as the least trusted. UPS, FedEx and USPS ranked second, third and fourth respectively.

The top intent for all the drone suppliers is to deliver products within one hour.

Although consumers may see potential benefits to their products being delivered in one hour by drone, the study found that no brand would currently improve their brand perception by offering drone delivery options.

Rather, Amazon, Google, UPS, FedEx and USPS would all experience a negative impact in positive brand perception by between 24% and 28% if they offered drone delivery, according to the study.