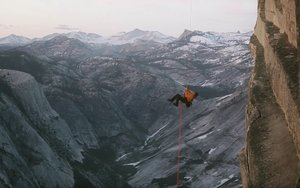 The North Face is launching a global brand campaign for its 50th anniversary that prompts consumers to “Question Madness.”

The campaign features breathtaking imagery captured from remote places around the world, with much of the footage shot by the athletes themselves while on expedition. It is set to “Miles From Nowhere” by Cat Stevens. Media for the campaign is being placed by Starcom.

The nearly two-minute anthem video will not be broken down into TV spots, says Tom Herbst, vice president of global marketing. The company is focusing this time around on online and digital networks, he says.

“This campaign was created for all consumers, with a focus on inspiring the next generation of people to experience success, joy and understanding on their own terms,” Herbst tells Marketing Daily. “The campaign is built around the unstoppable will and determination of our North Face athletes — a spirit that we believe lives in us all.”

The effort is first launching on Facebook and will be distributed globally throughout the fourth quarter in more than 16 markets including the United Kingdom, Germany, France, China, Hong Kong, Australia and New Zealand. It will appear on online media around the world, as well as via out-of-home executions.

Consumers are invited to share the stories of how they are pushing their own boundaries in the pursuit of exploration on social channels using #QuestionMadness.

The campaign “honors the values that drive everything we do,” Herbst says.

“Some people look at our athletes' expeditions and achievements, often realized at the coldest ends of the world or at the most dizzying and thin air of the highest peaks, and think they are quite mad,” he says. “For the first time, we are questioning what some consider mad and challenging that perception. Is it madness, or is it in fact progress? It is only through these feats that we test the limits of human endurance, that we understand the beautiful grandeur of nature, and feed our souls.”