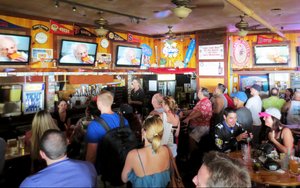 Weeks after unveiling a plan to introduce out-of-home measurement of television viewing in local TV markets, Nielsen today announced a plan to also introduce a “national” out-of-home TV measurement service, but it did not indicate whether and how it would actually be nationally representative.

Nielsen originally announced that it would begin measuring out-of-home viewing of TV as part of a plan to roll out so-called “portable people meters” -- handheld devices carried by panelists that to date have been used mainly to measure radio listening. Nielsen acquired that technology as part of its acquisition of Arbitron (now Nielsen Audio) in 2013, and has been licensing it to rival comScore as part of a consent decree related to that merger.

Nielsen said it was rolling out the PPMs to increase the sample size of its local ratings in 44 markets, and that it would also offer a measurement service of out-of-home viewing as part of that. Historically, agencies and brands have resisted attempts by television companies to make out-of-home viewing a formal part of their ratings currency, asserting that out-of-home audiences were always implied as a part of what it was buying, whether it was measured or not.

In today’s announcement, Nielsen said it was also rolling out a “national out-of-home” measurement service, although it states that viewing will be “based on data from over 75,000 PPM panelists across 44 local markets.” There are 210 markets in the U.S. TV advertising marketplace.

It said the sample will enable Nielsen to "project out-of-home viewing in over half of [the] U.S. population," but did not say whether that would be an extrapolation or whether it would use some other method -- such as modeling -- to make it representative of the national marketplace.

It’s not uncommon for Nielsen to mix local and national panels as part of its TV measurement samples. Its national TV ratings currently are comprised of a combination of some households participating in its local people meter panels, and separate “national” people meter homes.
media measurement, nielsen, out-of-home, ratings, tv
9 comments about "Nielsen Unveils 'National' Out-Of-Home TV Service Based On 44 Markets".
Check to receive email when comments are posted.
Read more comments >
Next story loading