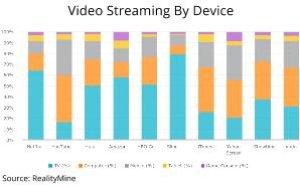 Streaming of TV and video content continues to rise and while conventional TV sets continue to dominate the way consumers view it, digital devices -- desktop/laptop computers, mobile devices and tablets -- each are growing their share.

In fact, in aggregate, digital devices have surpassed TV sets as the way consumers stream TV and video content.

That's according to findings released this morning by RealityMine, a U.S. research company that licenses Europe’s vaunted TouchPoints method for measuring the various media “touchpoints” consumers use throughout their day.

The research -- which is highly regarded by communications planners and media planners to help understand how to allocate budgets across media -- found that while overall streaming is on the rise, TV continues to be the No. 1 source for viewing it, accounting for 7.4 hours per week, per American consumer.

Computers accounted for 5.0 hours, mobile devices for 3.1 hours and tablets for 3.0 hours weekly.

While TV-centric services, such as Netflix, Sling, Hulu, Amazon and HBO Go, continue to be dominated by TV set consumption, YouTube and iTunes are dominated by the Web, both desktop and mobile (see chart).

The new data, which is available through Nielsen, IMS, Telmar and MRI, also found smart “wearable” devices are approaching 13% adoption among the American population.