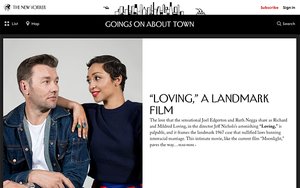 The New Yorker has rebooted its “Goings On About Town” section on its Web site, with a new, responsive design optimized for desktop and mobile viewing.

“Goings On About Town” has been part of The New Yorker since Harold Ross produced the first issue of the magazine in February 1925, according to editor David Remnick.

“Since technology has dramatically altered the way we get our information, we’re launching a completely redesigned "Goings On About Town" section, retooled and streamlined for optimal viewing on desktop computers, as well as mobile devices,” Remnick wrote in a memo.

“Goings On About Town” showcases New York City’s cultural happenings, divided into categories such as theater, nightlife, art, dance, music, movies, food & drink and above & beyond. “The quirkier events around town that are difficult to categorize, and all the more intriguing for it,” Remnick wrote.

The reimagined section will have bigger photos, as well as illustrations by Christoph Niemann and an animated header that will change with the seasons.

The New Yorker has also launched a new “Goings On About Town” video series, featuring snapshots of the New York City culture scene. For example, one episode spotlights Pisillo, an Italian panini shop in the Financial District and another dives into “Doomocracy,” an art-installation haunted house inspired by the current presidential race and political issues, such as climate change and gun control.

“Goings On About Town is timed to inform the reader about all the great stuff happening just around the corner, but it’s much more than a calendar of events. It’s an arts primer and a piquant snapshot of the day’s culture scene,” Remnick added.
interactive, magazines, mobile, new york, online publishing, redesign
Next story loading