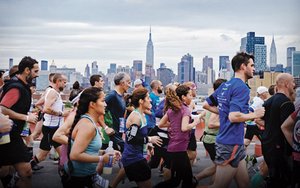 The watch brand tends to skew older and in an effort to attract a younger audience it has created a content program that follows runners at various skill levels as they train for the marathon. The new Tag Heuer Connected Watch is featured but the content is mostly about the journey the runners take as they prep for the grueling event, according to the agencies.

Tag Heuer is returning as a sponsor to the event and is the official timekeeper and timepiece of the NYC Marathon this year. The campaign includes the hashtag #Don’tCrackUnderPressure.

On race day, TAG Heuer will follow influencers from start to finish with the goal of providing consumers an “inside look” at what it takes to complete the marathon.

“Through our influencer partnership we wanted to show the TAG Heuer Connected Watch is integral not only to the marathon in which runners push themselves into the best physical shape of their lives, but also to universal life experiences and moments we all share,” said Francoise Bezzola, Vice President of Marketing at TAG Heuer.

The Havas Media and Cake team helped TAG Heuer partner with seven influencers, based in five cities (Miami, New York, Boston, Los Angeles and Salt Lake City) to document their journeys training for the marathon. The influencers chosen include those with large social media followings (including Chris Ozer, Tyson Wheatley Nick Bateman and Emily Jackson), as well as everyday runners who have an interesting story to tell (Christine Shimizu and Gabriel Valendia).

Tag has created a marathon microsite and is sponsoring marathon-related content at a number of websites focused on health/fitness and running.

Also the influencers are creating their own content including articles and running tips, race prep tricks and other information designed resonate with consumers while reinforcing the #DontCrackUnderPressure messaging.