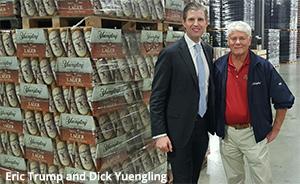 Yuengling beer has given up most of the significant positive perception it had developed with consumers over the summer after weighing in on the presidential election.

Brewery owner Richard Yuengling Jr. endorsed Republican nominee Donald Trump in the Oct. 25 edition of the Reading (Penn.) Eagle, according to YouGov BrandIndex. Donald Trump's son, Eric Trump, recently visited the Pottsville, Penn., brewery. In the resulting news story, Yuengling proclaimed: “Our guys are behind your father. We need him in there.”

Historically, Yuengling’s consumer perception tracks consistently above the beer sector average. However, Yuengling has fallen below that average since the Trump news broke and went national.

Corporate brands almost always go out of their way not to discuss anything remotely touching upon politics because there is just too much at stake with reputation and financially, says Ted Marzilli, CEO for YouGov BrandIndex.

“There is an old saying about not discussing politics in polite company,” Marzilli tells Marketing Daily. “That applies to more than party conversation. The atmosphere is just way too polarizing, especially when news, quotes and rumors can ricochet around social media in mere seconds. Even if your brand is beloved by consumers of a particular political affiliation, you just don't talk politics because somebody will alway be alienated. And why alienate anybody from your customer base?”

YouGov BrandIndex used its Buzz score to track Yuengling’s consumer perception. The question asked of respondents to determine the score was: "If you've heard anything about the brand in the last two weeks, through advertising, news or word of mouth, was it positive or negative?"

A score can range from -100 to 100 with a zero score equaling a neutral position.

On Oct.25, when the news story broke, Yuengling’s Buzz score was a positive 5. The New York Times followed up three days later and triggered a fall to a zero (neutral) score on Nov. 5. On that same day, the beer sector average Buzz score was 3.

Looking at perception by political party, consumers affiliated with the Democratic party sent Yuengling's Buzz score from 5 to -7 this past weekend. Republican consumers, whose scores are normally higher than Democrats for Yuengling, slid from 8 to 4 over the same time period.

So far, Yuengling has been remarkably quiet, probably ducking their heads down and hoping it will go away, Marzilli says.

“That may work in the short term,” he says. “However, it may be a wiser move to donate money to bipartisan causes and organizations, generating some positive press in the right direction.”