Car Of The Future: Ridesharing And Advertising On-The-Go 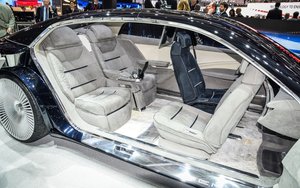 One of the most significant effects of the driverless car of the future will be the different ways that time will be spent in a car along with new revenue streams from in-car advertising, based on a major new study.

The lengthy global report on the car of the future by Citi GPS identified four major auto industry changes between now and 2030. They are:

The transformation of vehicles will hardly happen overnight.

There are three stages to autonomous vehicles, according to Citi. It starts with geo-fenced ridesharing, followed by ridesharing everywhere and then automated vehicles being sold to individuals.

The most significant changes coming relate to personal mobility in major cities and surrounding areas.

Citi GPS says this is where on-demand driverless rideshare networks make the most economic sense from a congestion, parking and pollution perspective.

The anticipated changes will begin with driverless rideshare networks in geo-fenced zones.

The unlocking of time spent in the car also introduces new business models, such as specialized cars and revenue from advertising, according to the study.

Projections include new business models for consumers, such as subscription services for autonomous vehicle networks, reduced warranty costs because of over-the-air updates, usage-based insurance and location-based advertising and coupons.

The study also determined that the four states likely to be the most significant for autonomous vehicles are California, New York , Florida and Illinois and the top ranked businesses to be General Motors, Google, Ford and Uber.

The ultimate success of future mobility rests on three pillars, according to Citi. The pillars are:

The report does acknowledge the reality of some consumers’ attachment to their cars.

“There is still something gratifying about owning an asset, and there is clear value in having the instant freedom of mobility that comes with having your own car,” the report states. “But who needs to own all of it, or any of it? Driverless cars could unlock car timeshare models where people with comparable schedules could partially own the vehicle — with a dealer in between to ensure proper care by the individual owners. Consumers owning such cars could also lend them to ridesharing networks in exchange for a fee, helping improve the affordability of personally-owned autonomous cars.”

The study notes that a fully autonomous car also unlocks value for consumers by freeing up time normally reserved for driving that can now be used for work or media consumption.

One of the major deciding factors for consumers may be cost.

Citi estimates that fully autonomous cars will be quite a bit more expensive, as in $5,000 to $8,000 more than a car that a person drives.

That may be a high price to pay not to drive.