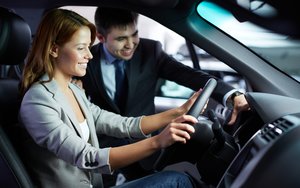 The antiquated notion that women are intimidated by car shopping while men are confident decision-makers is no longer reflective of the attitudes of today's carshopper, according to a study from Edmunds.

The fading of stereotypes is largely due to Millennials beginning to make up a bigger portion of car buyers, according to the “Car Shopping and Gender Report.”

According to the study of 3,000 U.S. adults ages 18-65 commissioned by Edmunds and conducted by the research firm Hypothesis, more than 70% of both men and women feel self-assured during the car-buying and negotiating process. However, when broken out by generation, Edmunds found that Millennial men and women are more alike in their feelings toward car shopping than are Gen Xers and Baby Boomers.

For example, when asked whether they believe that women are equal or better than men at car shopping, 64% of Millennial women and 54% of Millennial men agreed. When Boomers were asked the same question, 67% of women agreed, while only 48% of men did, resulting in an opinion gap nearly twice as large.

The world where Millennials grew up was very different than that of older generations, said Jessica Caldwell, executive director of industry analytics at Edmunds. For many, both parents worked and financial decisions were made equally, which is reflected in their different attitudes about gender roles in car shopping.

"Millennials are poised to become the predominate consumption group in the automotive industry, making it key that automakers, dealers and marketers understand how their perceptions are changing the way consumers approach car buying,” Caldwell said in a release.

Millennial men are more likely than older men to believe that women are equally or more logical than men during the car-shopping process. There was a 15-percentage-point gap in gender opinion for Millennials (59% of men vs. 74% of women), compared to a 27-point gap among Generation Xers (52% of men vs. 79% of women).

When it comes time to close the deal and purchase the vehicle, Millennial men are more confident in women than are men in older generations. Sixty percent of Millennial men say that women are stronger negotiators, versus 50% of Gen X men and 49% of Boomer men.

Even as the gap between genders is getting smaller by generation, there are still nuanced differences that drive home the need for personalized car-shopping experiences. Across the entire population, while more women feel assured that they made the right purchase than men (80% of women vs. 75% of men), 30% of female respondents stated that they didn’t know where to start the car-shopping process, compared to just 18% of men. In addition, 67% of all women wish there was a faster, more efficient way to shop for a car, compared to 57% of all men.