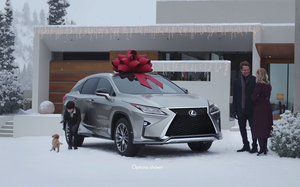 Lexus is encouraging consumers to wish big this holiday season, big as in a new vehicle with a giant red bow in the driveway. And a puppy.

The automaker is launching a new integrated marketing campaign for its annual “December to Remember” sales event. Anchored by five general market commercials plus two adaptations for multicultural media, the ads aim to rekindle adults’ love for the holidays and encourages customers to embrace the childlike sense of wonder that accompanies the season. The campaign was created by Team One, Los Angeles.

“When we first developed our annual ... campaign, we used the bow to position Lexus vehicles as the ultimate holiday gift,” Bolain tells Marketing Daily. “Though the bow’s design and the campaign creative have evolved over time, the icon is still an essential part of this campaign.”

The spots feature a Lexus vehicle as the ultimate object of desire, each with a family working together to reach Santa Claus. The spots play up how kids have Santa’s ear for wishes, and adults better go along if they want in on the gifts.

“Our media buy remains as big as ever to help drive awareness,” Bolain says. “In the past, we have always ensured our spots utilized a diverse cast, but recently we’ve added Spanish language versions to better complement our targeted media buy.”

“Forgery” shows a mother and father writing a note to Santa in red crayon, mimicking a child’s handwriting. Their young son walks into the room and catches them asking Santa for a Lexus RX F Sport on his behalf. He relents to the forged letter, but only if they’ll also ask Santa for a puppy. The spot cuts to the boy chasing a puppy around the SUV on Christmas morning; both the puppy and the RX are adorned with the iconic red bow.

“Auntie” features an aunt coaching her precocious niece to ask a mall Santa for a Lexus RC F. The aunt slips the girl a $20 bill as a trade, and the two high-five when the vehicle appears in the family’s driveway. “Santa Letter” opens with a young girl writing an elaborate letter to Santa at her kitchen table. Her mom dictates from across the room, directing her to ask for a Lexus GS F. When the girl struggles, the mom dashes across the kitchen to continue the letter. The two celebrate together when the GS F is delivered.

“Mall Santa” shows a boy on Santa’s knee at a shopping mall as he shares what he’d like for Christmas. He looks up to catch his dad’s eyes, and his dad mouths the words “Lexus LX 570” along with his desired wheel and tech specifications. His son dutifully repeats the words aloud to Santa, and both give each other an excited thumbs up. The whole family runs outside the house the following morning to find the LX parked in the snowy driveway.

The last spot, “Santa Cam,” opens with a girl video-chatting with Santa from her living room. She requests a Lexus IS F Sport sedan, since she’s been “really good this year.” Santa, skeptical, questions her gift wish. Her dad jumps in from off-camera, using a stuffed toy and a high-pitched voice to answer him. They slam the laptop screen shut in hopes Santa believed her request, and the two celebrate together when the bow-topped car appears.

The spots break Nov. 16 on network and cable television and sports channels. “Santa Cam” will be translated for the Hispanic market, and a second version of “Forgery” will be created for the Asian-American market. The campaign features seven weeks of multicultural media presence across 16 key markets, which includes broadcast, radio, print and digital executions.

The print campaign includes illustrations from artist Andrew Bannecker. The ads show various Lexus vehicles topped with red bows alongside the headline “Wish, Granted” and offer a modern interpretation of a classic winter wonderland. The digital campaign utilizes the same artwork for banner ads that will run on popular automotive and culture websites, and out-of-home extensions include placements in Verizon Center and Times Square.

But do people actually give vehicles as gifts?

“December is one of the biggest sales months of the year for Lexus, and people buy cars for various reasons including strong incentives, leases ending, and yes, even for gift giving,” Bolain says. “Dealers order bows for their December display vehicles every year, and have reported that a number of their December sales are treated as gifts by the buyers. We’ve even seen instances in which a family has plans to purchase a new car and they turn that moment into a surprise around the holidays, complete with a big red bow on top.”