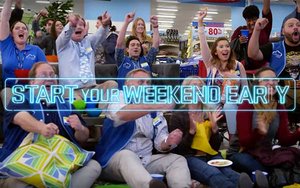 Taking on its new “Thursday Night Football” NFL games, NBC Sports is launching a new marketing campaign that will be highlighted with custom content from top shows -- mostly intended to drive Millennial viewers to its prime-time programs.

One spot has the cast of “Superstore” neglecting to help a customer because it is too busy watching “TNF” on the store’s TVs. In another, the cast of “Blindspot” solves a “TNF” tattoo mystery.

Jenny Storms, chief marketing officer of the NBC Sports Group, stated: “We wanted to distinguish “TNF” with the proposition that millennials start their weekend early.  And what better way to reach Millennials than with the casts of their favorite shows watching "Thursday Night Football" within customized spots produced by the shows themselves.”

Another piece of marketing content shows a fan walking into a glass door, with the spot touting: “Tuesdays can be tough…Thursday will be better. Start your weekend early with Thursday Night Football.” The NBC Sports spots were produced in collaboration with advertising agency VML.

NBC -- for the first time -- gets to air five “Thursday Night Football” games. It is splitting the season with CBS, which got to air the first five “TNF” games of the season. Both broadcast networks airings are simulcast with the cable channel, the NFL Network.