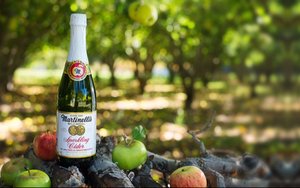 S. Martinelli's & Company has named Mindgruve as its new agency of record following an informal review. The producer of sparkling ciders and apple juices previously worked with Plessas Advertising.

Mindgruve will be responsible for managing marketing campaigns, strategy, community management, creative, as well as analytics.

Mindgruve will develop a new Martinelli’s website that frames the brand’s heritage with a modern, streamlined user experience. The site will take a more interactive approach to telling the brand’s story through cinemagraphs and parallax scrolling on their landing pages as well as animated display ads.

The agency and its new client are preparing to introduce a number of new integrated campaigns, including a promotion for Martinelli's 150th celebration in 2018.

Future campaigns will focus on Martinelli’s U.S.-based orchards and the fact that home grown apples are used in the company’s products, according to the agency.

“We selected Mindgruve for its unique approach to helping businesses innovate and grow,” stated Gun Ruder, VP of Martinelli’s. “We’re excited to leverage the agency’s strategic, creative and ecommerce capabilities to help increase both Martinelli’s brand awareness and sales in the near future, while remaining true to our established traditions of excellence.”