NBCU Invests $200M In 'BuzzFeed' To Up Ad Sales, Video 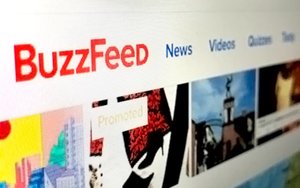 NBCUniversal has made another $200 million investment to expand its partnership with BuzzFeed, funding the growth of BuzzFeed’s digital media network and its advertising sales.

Last summer, NBCU invested roughly the same amount in BuzzFeed. Recode, which originally reported on this investment, estimates that BuzzFeed’s valuation is now around $1.7 billion.

NBCU’s most recent investment in BuzzFeed will fund its production of short-form, cross-platform digital video content for advertisers working with NBCU’s content studio.

NBCUniversal will represent BuzzFeed’s entire inventory to advertisers. In addition, BuzzFeed will use the investment to build its data science and technology capabilities.

Kenneth Lerer, BuzzFeed’s executive chairman, stated that mobile content is “where all the excitement is” right now in the industry. “This follow up commitment from NBCUniversal will allow us to continue to build out our footprint, invest in new products and continue to aggressively grow our revenue,” he said.

This isn’t the first time the two companies have partnered. NBCUniversal and BuzzFeed worked together on the 2016 Rio Olympics coverage on Snapchat. They have also co-sold advertising deals and collaborated on content partnerships, such as Tasty videos that appear on NBC's “Today” show.

BuzzFeed is a powerhouse when it comes to creating digital content for millennials. The site now gets more than 7 billion content views per month, and per the company, reaches more than 500 million people on digital platforms.

“BuzzFeed has helped us engage millennial audiences with our content and extend the reach of our clients’ campaigns to new platforms,” stated Maggie Suniewick, president of NBCUniversal Digital Enterprises.

However, in April, the Financial Times reported that BuzzFeed missed its 2015 projected revenue of $250 million, instead pulling in $170 million.

Big TV networks have made a pattern recently of investing in digital media companies. Around the same time NBCU made its first BuzzFeed deal, it also invested $200 million in Vox Media, the online publisher of the Verge, Eater and Recode. Disney put $400 million into Vice Media and Thrillist's new holding company Group Nine Media secured $100 million from Discovery.