Looking For An Awesomely Ugly Sweater? There's An App For That 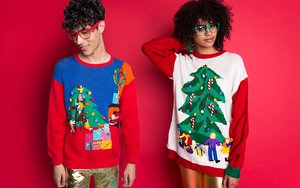 Now that such gay-cum-tacky-apparel has gone mainstream—both Walmart and Target have big ugly sweater promotions on for the holidays—Ragstock decided it needed a way to make its array of warm and kitschy collectibles stand out.

To do so it turned to Folklore, the agency that was founded by four former Mirum Minneapolis executives who departed earlier this year to start their own shop. It came up with the Swipe-A-Sweater app which features a vast selection of Ragstock’s cringe-worthy sweaters for the holiday season and a better way for users to sample the collection.

Libby Finn president of Ragstock said one of the challenges that consumers have had with the company’s ugly sweater collection was its vastness—25,000–plus—which presented shoppers with the daunting task of plowing through pages of images in their search for blizzard-busting bliss.

The app helps users more quickly sort through the collection with a quirky Q&A that narrows down the field based on sweater style, your mood, body type and what you’re most excited to do during the holidays. And each sweater in the selected assortment has a somewhat silly name based on answers provided (Donner Polishoff, Comet Gnaw and Hindy Savor to name a few).

According to Finn, the agency presented the company with a number of ideas but the app jumped out. “It spoke to us,” she said. “It’s quirky and fun and it also solves a problem.”

The app was a one-off project, but Finn says the experience with the agency was a good one. And the company sells other holiday-themed attire (Halloween, and St. Patrick’s Day among them) in addition to normal clothing. “Hopefully we’ll do more with them in the future,” she said.