Microsoft Needs To Learn How To A/B Test 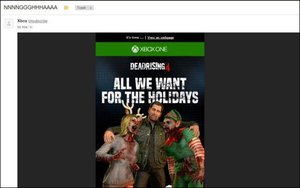 Microsoft made another email blunder on Monday when it sent an email promoting "Dead Rising 4," the fourth installment of a zombie apocalypse game planned for release on the Xbox One gaming console in early December.

The email subject line attempted to imitate the moaning of the undead with the phrase “NNNNGGGHHHAAAA,” but instead was interpreted by many on social media as a racial slur.

The technology giant has since apologized for the mishap on Twitter, where the company’s PR representative Larry Hryb wrote: “Today we sent a DR4 email where a zombie roar was interpreted by many as a racial slur. We apologize and promise to do better next time.”

This is not the first time Microsoft has sent insensitive promotional email content. In July, Microsoft found itself in hot water after an email sent from a Microsoft University Recruiter encouraged interns to get “lit,” or intoxicated, on a Monday night.

The email also referred to the recipients as “bae,” a term of affection often reserved for a significant other as it is a shortened version of "babe" or "baby."

It would appear that Microsoft has yet to learn the importance of A/B testing, a critical juncture of email marketing campaigns that can help safeguard brands from such cultural no-nos. A/B testing, or split testing, is the practice of comparing two versions of the same email (or web page or mobile application) to see what version elicits the highest and most positive engagement rates.

With A/B testing, marketers can test a wide variety of email components to optimize conversion rates, including the recipient’s name, subject line, email frequency and the amount of content within the body of the email itself. Jordie van Rijn, an email marketing specialist and blogger at emailmonday.com, provides a list of 150 different ways to A/B test an email.

A recent study of more than 300 email marketers representing brands with more than 100 employees by Clutch reveals that only 23% of marketers incorporate A/B testing into their email marketing campaigns.

ad optimization, email, microsoft
1 comment about "Microsoft Needs To Learn How To A/B Test".
Check to receive email when comments are posted.
Next story loading