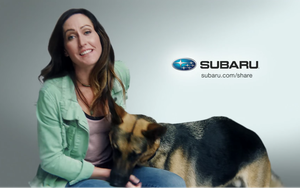 Subaru of America is launching an ad campaign featuring real stories from people who have been positively impacted by the Subaru Share the Love program over the past nine years.

The effort assists the automaker’s national charity partners: the ASPCA, Make-A-Wish, Meals on Wheels America and the National Park Foundation. Through Jan. 3, Subaru will donate $250 for every new Subaru vehicle purchased or leased to the customer’s choice of the four national charities with a minimum guarantee of $250,000. In addition to these partners, Subaru retailers have selected more than 660 hometown charities for their customers to support as well. By the end of this year’s event, Subaru hopes to exceed a grand total of $90 million donated since the creation of Share the Love.

In addition to these partners, Subaru retailers have selected more than 660 hometown charities for their customers to support as well. By the end of this year’s event, Subaru hopes to exceed a grand total of $90 million donated since the creation of Share the Love.

The national TV spots, created by Subaru of America in collaboration with agency partner Carmichael Lynch, highlight inspiring beneficiaries of the four national charities, who tell their stories and encourage viewers to put a little more love in their hearts this year. The song “Put a Little Love in Your Heart” features prominently throughout the campaign, and is performed by each of these inspiring people as they tell their stories.

“They are all very powerful, and we are using these stories in our national television spots, as well as digital and online video,” says Brian A. Cavallucci, national advertising manager, Subaru of America, Inc. “We have never had individual spots that focus on each national charity partner, so that is new this year. And since Subaru is expecting to sell more cars than last year, and give more money to all of these charities, that is certainly something to sing about.”

The “Share the Love” version of the song will also be available for streaming on Pandora and Spotify, and for download via iTunes and Google Play, and the Subaru profits from each download will be donated to these four Share the Love charities.

The spots will air in 30- and 60-second formats on national TV, and will also be featured through targeted digital and social media promotions. In “Donn,” a 96 year old from Southern California relies on Meals on Wheels volunteers like Anna to deliver the meals he needs to stay nourished and healthy at home. “Gabe” features an 11-year-old boy with a passion for the national parks.

Thanks to Make-A-Wish, Gabe’s dream of becoming a park ranger became a reality. Rochelle rescued and adopted “Gunner” from a local shelter, giving a neglected dog a second chance at life, but in the end, they saved each other. In “Junior Ranger,”Tigran is an enthusiastic young man with a passion for the national parks and a dream of one day becoming the director of the National Park Service.

“We see and hear the response to these authentic stories from real people that have been helped by these charities, and through the donations that Subaru makes through the Share the Love event,” Cavallucci says. “It was an honor to meet them, talk with them, and hear their stories. We didn’t tell them what to say, we simply just talked to them, and got it on camera.”

In addition to the creative spots, Subaru executed several integrations on Nov. 18 when this year’s “Share the Love” event officially got underway, including a nationwide sing-along of “Put a Little Love in Your Heart” on "Good Morning America" and a partnership with iHeartRadio to take over an hour of programming in key markets, to create awareness for the song and highlight Subaru’s charity partners. Subaru also ran a national Sponsored Lens on Snapchat for 'Share the Love' that will trigger the song to be played based on a snapchatter's facial expressions and movements.