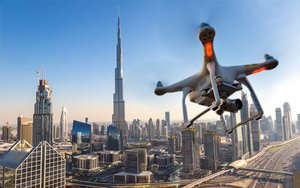 A traffic management system for network-connected drones may soon become a reality, with another new collaboration between major players aimed at integrating drones into smart cities.

Nokia just teamed up with the United Arab Emirates General Civil Aviation Authority (GCAA) to design a full ecosystem for network-connected drones in Dubai, part of which includes a traffic management system.

The collaboration, which is part of the GCAA’s initiative to transform Dubai into a world-leading smart city within the next year, aims to both develop the system for managing connected devices in the sky and build the infrastructure for future testing of drone capabilities and use cases, according to Nokia.

"The UAE is committed to making Dubai the smartest city in the world, and UAVs are expected to play a critical role in this process by supporting a wide variety of smart city services,” Bernard Najm, head of the Middle East market unit at Nokia, said in a statement.

“This collaboration, the first of its kind in the world, gives us a unique and extensive test bed where we can trial and refine our UAV Traffic Management system, and shape the future of UAV management overall.”

The idea of the traffic management system is to not only manage the integration of large numbers of drones safely with their surroundings in city areas, but also design how they operate in relation to humans, other manned aircraft and various other connected devices within the Internet of Things.

Nokia plans to focus on a few areas to accomplish this infrastructure-level integration, including the automation of flight permissions, beyond-line-of-site operation and controlling no-fly zones.

Nokia isn’t the only player working toward a UAV traffic management system, however.

AT&T and NASA also recently signed an agreement to develop a traffic management system for UAS (Unmanned Aircraft Systems) and the general goals and objectives appear to be similar, although the specific approaches may vary.

The areas of focus for AT&T and NASA include flight planning, navigation, surveillance and safe tracking, as well as researching the cybersecurity aspects of network-connected drones.

AT&T and NASA are not working directly with the FAA in the U.S., which currently restricts certain aspects of drone operation necessary for network-connected and autonomous drone flight, such piloting an aerial vehicle beyond-line-of-sight. However, the organizations have been involved in ongoing research, testing, and exploration with the FAA to further develop drone regulations in the U.S.

The dynamic in Dubai appears to be different, given that Nokia is working directly with the regulatory agency and the GCAA is actively pursuing the development and implementation of these types of drone systems.